So yet again I need to write and update, things have been going on really fast and I know there’s too many people out of the loop. So I’m committed to at least getting a bit of an update out so here goes…

After that awful experience at the North Wales Cancer Centre, I and some helpful supporters went on a mission to decide what to do next. We ended up with a second, third, fourth and fifth opinion (sixth too if you count that number 2 got their own second opinion). This was actually, really, very stressful. Turns out there is no consensus at all. Insufficient evidence.  I’m also now quite sure that the Proton vs Photon (conventional) therapy debate is quite a hot topic within the Oncology field with arguments presented very forcefully. There were some interesting points made and I’ve definitely learnt a thing or two but in the end it was up to me to “choose”. As I said before, I’m very, very lucky to be in a position to choose. It’s no bloody fun though.

The doctor’s are split down the middle, passionate (not really, really passionate, just professional doctor passionate) and credible arguments are presented on both sides. As you can imagine I ended up doing quite a lot of my own research, reading papers etc. I also ended up doing a decent chunk of due diligence on The Rutherford Cancer Centre after one of the oncologists implied (stirred up by anti-proton passion) that they were using second rate equipment and weren’t sufficiently qualified**. There were lots of discussions about the technology: Conventional Radiotherapy is a very mature, stable technology, we know exactly what it does and what it doesn’t. Proton Beam is relatively new, the technology is evolving all the time, it’s not that stable and we don’t know as much about the results, particularly in my specific tumour type. Having such a long life expectancy is such a drag when you want to know the results of medical progress*.

In favour of Proton Beam: early indications from the studies underway suggest it is as effective or possibly more effective. In principle and a little bit in practice, there should be fewer/less severe side effects. The technology is evolving so fast that there is considerable potential upside (ie it could be very good but it’s too early to tell, the data on Proton Beam will be relevant to technology 10 years ago and the stuff is developing fast). The fact that NICE approves it’s use in younger adults is the biggest argument in favour, far more people than me and these 6 doctors will have been involved in that discussion and that discussion will have lasted a lot longer. The assumption is that it probably is better it’s just I’m excluded from the NHS because the economics of treating my age bracket (life expectancy too short for the quality of life benefit to reach economic levels).

The downside of Proton Beam – we don’t know, we can’t be really, really sure. The other downside? The technology is unstable (explanation coming up later…)

So fast-forward through all that discussion we finally cleared everything up just before Christmas and decided to go for the Proton Beam treatment at the Rutherford Cancer Centre. So here I am…  sitting in a little rented house in Newport. Tomorrow I will have my 13th Proton Beam treatment. 13 down, 17 to go. It’s OK. I quite like Newport (hillier than I imagined). The Clinic is nice and the staff are friendly. I’ve made lots of plans with friends and family who are driving me down, driving me home and keeping me company in between.  I’m grateful to be supported by so many lovely people.

Receiving radiotherapy to the brain is not very pleasant, I am required to stay very still. For this I have had a special mask made.  It looks a bit scary. I don’t like it one bit but I’m coping. 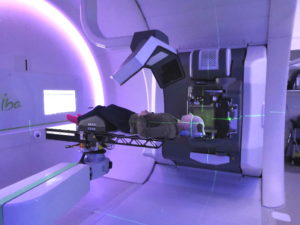 I try to keep my head very still. The machine has a spot tolerance of 1mm which is a pretty small wiggle. No wiggling!

It took until day 3 for me to fully understand the other, bigger reason for no wiggling. I reached out to scratch my nose during a time when all the whirring, buzzing and crackling stopped (keeping my head very still still). Now I’m told that when they say “stay still” they mean everything, not just my head.

Why? Because the machine is very unstable. We’re definitely in “cutting edge” technology  (“bleeding edge” as my Dad used to say). They clearly know this, the Machine has a team of minders on duty all day. There seem to be 6 radiographers hanging around, 2 full time engineers supplied by the manufacturer and 2 engineers/physicists employed by the clinic. What are they all focused on? Stopping the machine tripping over it’s own arms it seems. I’m seeing a clever engineering friend next week and I’ll find out more but I suspect that if you have 3 flying arms and a patient that moves a bit, stopping bit of the machine crashing into itself is a really tricky job. Yesterday I found out that sometimes patients falling asleep and snoring which can stop the machine in it’s tracks. Essentially I think it has a default position that if it picks up on any movement at all is says “STOP WE’RE GOING TO CRASH”.  Quickly to illustrate a little – there is the bed that can move up, down and spin you around (fun!), this swings inside a massive rotating tube (a bit like a hamster wheel or the things at funfairs where you get rolled around). Attached to the inside of the tube is the box that delivers the beam – this moves in and out. Also scanning equipment that rotates with the tube too. The scanning equipment (CT) monitors the exact position of my head before treatment and will adjust the bed or the tube or the beam delivery box (this probably has a better name) accordingly. It’s all very clever. And very, very sensitive. No Wriggling!

The unintended consequence of all the stoppages is that sometimes everything goes very still and quiet for quite a long time (probably 10 to 20 minutes), my head is strapped down quite forcefully which is a bit uncomfortable and somewhat terrifying after a stillness and silence long enough for me to imagine that the whole team of minders have wondered off to the pub. Leaves me with the feeling that this gang of 10 are so focused on The Machine, have they forgotten about me?

The Machine is so sensitive that that it has stoppages frequently for arbitrary amounts of time. So far, I’ve had a range of disruptions/delays for example.. 3 mins, 20 mins, 2 hours, 2 days. Monday’s was cancelled, Tuesday they put me in a Taxi to Reading (where they have an identical machine) and added a new treatment in on Saturday to make up from Monday. I’m pretty sure this is normal and is why the business strategy relies on a small network of centres to accommodate the level of sensitivity to wriggling /random machine breakdowns. Not just wriggling mind you, there’s also been a problem with general maintenance stuff, so fingers crossed all settled now. It’s not fun having the schedule messed around with and I didn’t enjoy my experience in Reading – the Wales centre has a more settled, friendly feel to it, I think they’re still finding their feet there.

I’m warned that symptoms might start showing up at day 7 to 10. So far so good. We’ll see. I’ve just completed number 12 and all OK so far. Fingers crossed.

I have a new plan for sharing with you. It doesn’t mean I won’t do the blog updates it’s just I’m aware that lots of people are thinking of me so I thought it might be nice that I can send the odd update over WhatsApp, imagining frequency between twice a day and every other day.  If you’d like to join email me your number and I’ll add you in.

If you’re a nana/granda and don’t have WhatsApp ask your nearest young person for some help- it’s quite easy and you can, with a bit of effort, use it over your PC avoiding smartphones if you like. You’re also welcome to join the group, mute it and just check back every so often if you feel like it. Don’t worry about coming and going, joining or not joining. I won’t take it personally. I’ve set it at the moment that it would just be me transmitting the odd update so it won’t be crazy noisy. 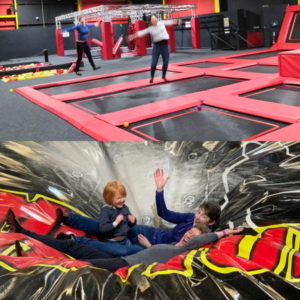 This is the sort of update I would imagine I could share… “so far, so much fun in Newport, I’m enjoying being in town! We’ve had a lot of fun at the trampoline park! (see photo)”. Blog updates will continue as normal (ie. slowly)

* In case this needs explaining – because it could take more than 15 years for trials to fully complete, to make proper evidence based improvements/iterations and be really, really confident about them, would (will?) take generations to get almost nowhere. So that’s why the choice is hard – nobody knows for sure so how do you make the best guess?

** Summary of my due diligence… The doctors at the clinic appear totally legit, the equipment is installed & maintained by a/the market leader in Proton Beam manufacturer and is one of the most popular machines around so not too fancy, it’s the latest version though so fancy enough. The planning scans are checked/ completed at the UPenn in America which has one of the largest proton beam centres in the world. So effectively, I should be getting the same treatment in Newport as I would be having if I was at UPenn and being at UPenn would be a good thing.