I wanted to write to you all as I know different friends have had different bits and pieces of information about the goings on in my brain and I think if it was one of you guys going through all this I’d be wanting to know how you’re getting on. It would be nice to speak with people but I can’t quite manage phoning around everyone.

I’ll start from the beginning, About a month after Ivy was born I had a “funny episode” in Lidl. This was followed by quite a few more. I didn’t loose consciousness but experienced a strange hallucination (I was worried it was some sort of psychosis). Oddly, the hallucinations are in funny accents – most often Australian! In November, I went back the GP as they hadn’t stopped and she thought it was probably epilepsy and referred me to see a Neurologist and also for a CT scan.
The lovely folk in the hospital at Aberystwyth managed to squeeze my scan in the morning before we left for our big trip to Scotland on the 8th of December. If you haven’t had a CT, it’s quite a lot of fun – it feels like something very futuristic with beeping and whizzing and the bed thing you lie on moves in and out. Unfortunately the GP then phoned with the results just before Christmas to say that the CT scan showed a brain tumour. In some ways this is not the best of news, but it is quite good to have an explanation for the the epilepsy and also the indication from the CT scan is that it is very likely a type of benign tumour called DNT / DNET. The plus side , if this diagnosis is accurate of this type of tumour is pretty safe, slow growing, benign and, for most people, complete recovery from the epilepsy following surgery.
A couple of weeks ago I went for an MRI scan in Aberystwyth. MRI is much less fun than CT, it takes longer has a much more disturbing noise and in Aberystwyth the radio played into your ears to try and mask the awful grinding sounds is stuck on Radio 1. I’m much too old for Radio 1. The results were not great, turns out my brain tumour is massive! It’s 6cm x 4cm x 3cm. Illustrated below by the very handy and cheerfully edited egg photo. Unfortunately, unlike with pregnancy scans they don’t offer you a print for £4.50. This is a shame, as the pregnancy scans are pretty boring (who hasn’t seen one of those before?) the brain tumour scan is quite unusual. 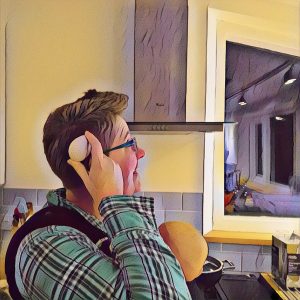 With the results of the MRI we visited the neurologist in Telford last week. He was frustratingly un-reassuring as the nature of the tumour, however on the plus side it’s in my right (non-dominant) temporal lobe and it turns out that if you’re going to have a tumour this is an excellent place to have it. If there is brain damage here it seems you can get by without it. He also insisted I take some anti-epilepsy drugs which I’ve now been taking for a week and luckily aren’t causing me too much trouble so far. I’m still having seizures but they seem a little lighter. I’m getting quite nervous though as they also seem more frequent and the neurologist has frightened me. When I asked what would happen if I have too many seizures his reply was “you go deaf, you go blind, your face go all droopy, like this (*pulls a droopy/dribbling face)”.
This week I’m off to see the neurosurgeon in our local brain centre, 2.5 hours away in Stoke on Trent. From chatting with the GP and the neurologist it seems likely that I will be booked in for brain surgery to remove the tumour. I suspect that this, like foreign travel for work, is not quite as exciting and sexy as it sounds. However, the idea of wondering around with the egg tumour in my head is slightly disturbing so I’m hoping for a speedy date.
Other tid-bits: Ivy is fine and just as chirpy as every, the epilepsy drugs are safe and we’re getting her used to drinking from a cup so she won’t go hungry when I’m getting surgery. I’m not allowed to drive which is very disruptive. Hopefully I will be able to drive again but not for some time after the surgery (at best, 6 months or a year)
Please don’t worry, I think it’s all pretty safe and I’m not too worried – just a bit preoccupied. Also, this is not a secret please feel free to chat with mutual friends. I’ve just sent this to folk I’ve spoken to first as it seems like rather a serious topic to send by email out of the blue. I’ll let you know how I get on with the surgeon. To be continued….
lots of love,
Amy x
all