Oh dear, I just lost all my work. And my stupid brain injury makes this much more troublesome as I can’t remember what I wrote. This is very annoying. Anyhow here goes…

I know what I was trying to explain, I’ve taken my last chemo pills. This is a good thing as the darn bloody things make me feel like absolute shite. Technically, I don’t finish till March 25th – the end of the 12th cycle. I’m happy to be finishing but am aware that it might take quite a long time to recover (if I do). My plan is to try and get some fitness back and if I can feel well again in 6 months then I’ll be pleased with that.

So I wanted to address some sciencey treatmenty stuff in this post. First of all…  what next? Well I’ve drawn a handy little flow chart…. 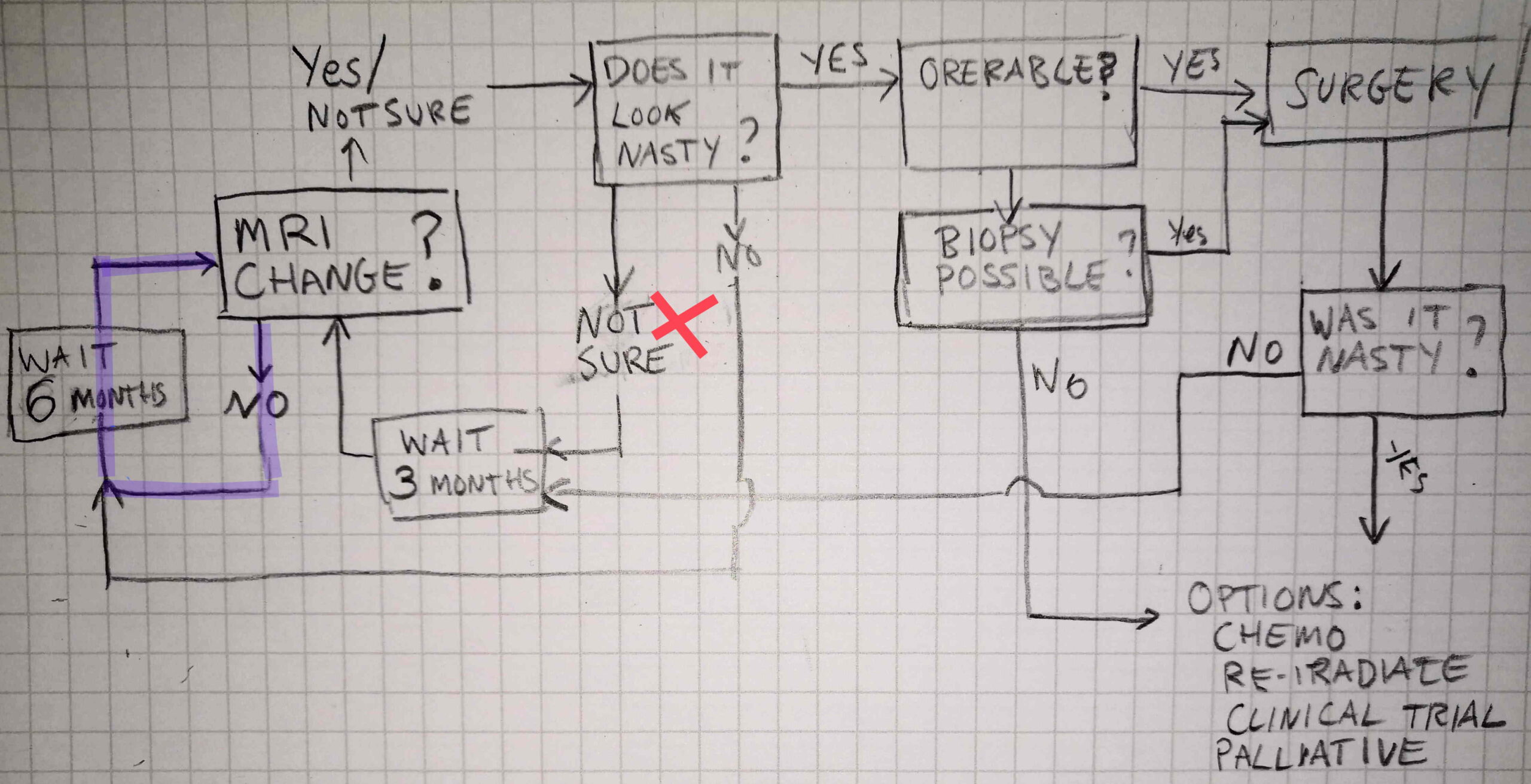 I’d been happily hanging out in the purple 6-monthly check loop. This diagram represents what’s next from here (it doesn’t work for how I got here!). Right now I’m at the red X. I had a scan in Liverpool in January and the surgeon isn’t quite sure about a little spot. I think it’s probably not that bad, there should have been an interim scan in May but this one was COVID cancelled. Mr H says it’s too difficult to use the Bronglais (Aberystwyth) scans for comparison so has ordered another in Apr to see if it’s changing or not. All being well, I’ll get back to the little purple loop by the summer.

So hopefully that’s answered a few questions. Next I want to explain why I can’t answer the questions… “Has it worked?” or “When do you get the results” or “so has the cancer gone now…?”. In order to do this I’m attempting some strange analogy science….

I have a grade 2 Glioma. Astrocytoma. It’s a cancer of the Astrocytes, a type of Glial cell. If you want to read a good explanation of what the Glial cells do there’s one here

So I have cancerous Astrocytes in my Brain. Think of them as a little army of really angry, invisible baby lice, let’s call them A2-lice. When they hang out close together they can be seen on MRI and we can call that a tumour. However, when they wonder off on their own, they can’t be seen or identified. They can wander about the brain, but not through the blood brain barrier which is a good thing because it means I shouldn’t get secondary cancer outside of the brain. These little A2 lice are extremely unlikely to kill me.

Unfortunately, these little lice want to mutate into pretty nasty poisonous kid grubs (they aren’t necessarily bigger but they are nastier and can get together in gangs more quickly). Lets call these AA3 grubs. Eventually, they mutate into really, really nasty teenage gangsta tics, called GBM. (The GBM tics really like to get together in gangs and cause mayhem, again the individual isn’t necessarily bigger, just the gangs grow faster. these gangs need their very own blood supply so they can keep eating and growing)

The objective of treatment is to head off those AA3 grubs and the GBM tics. The fewer baby A2 lice there are about, the fewer there are to evolve into nasty kids/vicious bugs. Fortunately, so far, my A2 babies have been slow growing and not doing very much. The main treatment strategy is to manage the A2 lice and keep them from malignant transformation. First surgery to get the big gang out (luckily, they were quite close together in one big house (with a pool and everything!)). That was quite successful but some of the darn things were wondering off into my brain and they can’t be found, despite taking great chunks of extra brain out, some had wondered off too far / too close to my optic nerve.

Regular MRI’s: the objective is to watch out for any nasty gangs coming together, especially if they look like the could be transforming into AA3 or GBM. Last year, there was a little gang getting together and my surgeon didn’t much like the look of it. Hence surgery where he removed all the visible gangs.
When the removed tissue was analysed, there wasn’t any sign of kids or teens hanging out so that’s good, still just got those pesky baby A2s.

Radiotherapy / Chemotherapy
Evidence suggests that there is a life expectancy improvement if we take Brain Radiotherapy and Chemotherapy (TMZ or PCV) to treat the A2 lice but in reality the evidence is quite weak as we don’t understand which patients are helped and which aren’t (on average it probably helps a bit, perhaps adding 2 years to overall life expectancy). We don’t actually know if the Chemotherapy kills the baby A2 lice. However, there is sufficient evidence that they can kill the grubs/tics (AA3/GBM), this evidence is extrapolated (badly) to assume/hope/guess that it also works on A2. The two hopes are 1st) Chemo does work on A2 lice.  2nd) If the timing was bang on, we may have knocked a few mutants on the head before they had a chance to make nasty gangs.
As I imagine I’ve mentioned before, there is also very little evidence to back up the dose or the length of chemotherapy treatment. Dosing trials tend to look for “maximum tolerable dose” rather than “maximally efficient dose”. Chemotherapy “works” best if it just doesn’t kill you. I challenged the oncologist on the timescales – lots of American patients will take a 6 month cycle, where as standard of care here is 12 months. Why? Nobody knows,

Results
None of these mutant cells are identifiable on MRI unless they’re in a big block. The scans are either looking for gangs or looking for new blood supplies forming to feed the gangs – I’ve none of these yet hence while I’m still “Grade 2” and not “High Grade”.  As there’s very little tumour to see, it’s not possible to have a “result”.  There’s a little spot showing (the one the surgeon wants to track) but this could be tumour or it could be damage from the treatment, called “pseudo-progression”. Hence I’m still optimistic that I can return to the purple loop. There is a “cloudiness” where some of the A2 lice are probably hanging out, it’s not clear if the treatment has helped here on not. Sadly (devastatingly) the best result I’ll ever get is “nothing terrible has happened”, ie no sign of AA3/GBM. that’s all I can have. Astrocytoma don’t do “remission”, they just do nothing…if you’re lucky.

So, in summary: I have been taking an arbitrary amount of an arbitrary drug for and arbitrary length of time to fight an invisible cancer that we could barely see before and still barely see now. Clear?

Apology On re-reading this, I can see that the “gang” analogy is quite weak but it’s the best I’ve got for now so am sticking with it! (it’s not that they’re floating around and come back together, it’s just that they can appear either dispersed or concentrated or anywhere in between). Also, isn’t it amazing how Medicine can simultaneously be be both amazingly clever and absurdly clunky? I’m hoping some of the amazingly clever stuff will pull through for Astrocytoma before too long.