I’m feeling bad again, I’m now in the 8th week past surgery and you haven’t heard from me. I haven’t had the courage to write but I do know that you care. I’ve been struggling with feeling very sad, a bit too sad to write and sometimes too sad to do anything. I’m sorry too to anyone who’s reached out in the last few weeks if I’ve just been less communicative than usual. I think I’ll be better soon and here is some news for you. 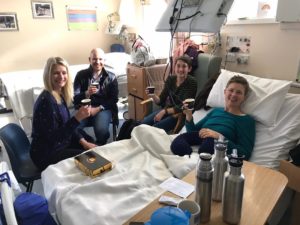 I had surgery on Tuesday the 15th of October. It went well according to the doctors, they were happy that the got as much as was possible. I was happy too as I didn’t have to have an argument with the nurses about catheters which had been awful last time. I did watch a youtube video of how to take one out and I took scissors just in case but thankfully they weren’t needed.

Corinna came with me and looked after me for the first half of the week. It was her 40th on Thursday and Dee came up for handover and a quick party with Chris (see pic)! Recovery in hospital was OK and I was discharged on the Friday.

Weeks 2, 3 and 4  My recovery was painfully slow and also painful. It seems I picked up a UTI on the way out of hospital which I think had a massive effect on my ability to recover from the rest of the trauma. There was a lot of vomit, a wide range of drugs, a good deal of pain (damn head was a bit sore for some reason) and a few tears (not just mine). I feel very lucky that I was able to get a call out doctor and also had a lot of help from the district nurse as we were getting into A&E territory for a little while. I took a fair amount of morphine. I didn’t really do anything apart from lying around, sleeping and feeling sorry for myself. Though just remembered we finished Ivy’s room so I did do a bit of furniture assembly.
It was a tough few weeks, we needed a lot of help and I hadn’t planned for this as I felt so well post surgery last time. We were lucky to have a lot of help from our nearest and dearests.

Week 5  I had my follow up appointment with Mr H. It should really have been in week 3 but he was on holiday and I missed an appointment in week 4 because the Walton Centre forgot to tell me I had an appointment. Not great but hey ho.  Between us, Dee and I managed to cry most of the way there and definitely all of the way back.

This is the appointment where I find out about the tumour pathology. The results were, again, as good as can be hoped for. Essentially no change, it’s still a Grade 2 Astrocytoma, IDH+. I did ask to check for a BRAF mutation too. It’s a long shot but it has this link to melanoma and I thought worth checking. This came back negative which was a shame as there’s actually some drugs that appear work in the long term if you have it. So that little window of hope closed.

Next was the big bombshell/not a bombshell. Oddly, I think I knew this was coming but somehow the whole thing took me by surprise. I was being referred for Radiotherapy & Chemotherapy. This made me and is still making me almost unbearably sad. I can’t dwell on writing this right now because I’m already so tired of crying but in brief I can write just a few things… a) CANCER is a big word b)radiotherapy to the brain almost inevitably causes progressive dementia c)the long, slow, painful march to death.

Week 6 Mostly, I cried. Dee, Ivy and I also went on a wee holiday for Dee’s birthday where I didn’t cry all the time so that was nice.

Week 7  Mostly crying. On the Tuesday we had a not so cheery jaunt to the North Wales Cancer Centre to meet my oncologist. It did NOT go well. I’m going to try and do this quickly so punchy rant coming up…. North Wales appear not to have any specialist neuro-oncologists. This chap was a lungs/breast specialist, “Consultation” my arse. 4 hours in the car so some cockwomble can read me the NICE*  guidelines, fail to answer any questions and determinedly suggest I stop taking notes. Then he took at least 5 minutes to not explain why although he did have access to the latest equipment it wouldn’t be for me and, whilst some one of the best chemotherapy drugs are available they too would not be for me. Basically, there’s no way I’m letting this twit fry my brain.

On the positive side, the place is quite nice they have a hostel so you can stay over during treatment because it’s so far away and a transport service to ferry people in from across the area. Delightful. Then I went to an appointment with my therapist and cried there too.

*National Institute for Health and Care Excellence : essentially these are the guys decide what treatment doctors should offer, there’s not a lot of flexibility or scope in the system and I’m already very familiar with the guidelines for my condition so I don’t need Dr Cockwomble to tell me them.
I need to add a little technical info here. I really don’t want to do it, but NICE guidelines are 6 weeks of radiotherapy (on whatever old machine they can find) followed by 36 weeks (6 x 6 week cycles) of chemotherapy called PCV which is famously unpleasant. Although they prescribe 6 rounds of this it’s so toxic that most people don’t complete this.

Week 8  Still mostly crying. We’re coming up with a plan though so I think it’s getting better. I’m getting some 2nd and possibly 3rd and 4th opinions on the whole matter. I’m very lucky to have the opportunity to go to see a private doctor. It’s important for me to at least once meet with someone I can trust to give me an honest opinion without being constrained by NICE guidelines. I just want my brain to be fried in the most delicate way possible. It seems like a reasonable request.

So, in summary, it feels like mostly crying. On the plus side I noticed something funny so let’s try…  The crying of course, is a sign that I’ve been feeling really quite miserable. fed-up, tired, bored, grumpy, flat, miserable, miserable, miserable. I sort of stopped flossing. Now if that means nothing to you, you could read this. It reminded me that one of the suicide warning signs, if you’re looking out for friends, is if you’re friend starts demonstrating “risky behaviour”. In conclusion, I have been really really sad, about miserable and pessimistic enough to engage in a slightly risky every-other-day flossing schedule. Don’t worry too much about me yet folks.

p.s. Did you guess the mystery? They won’t play music in the MRI scanners at the Walton Centre because a small minority of people can’t help themselves but to bop their heads along with the music and it’s takes a long time (ie. expensive) to repeat scans. At least I now know. Fuckwits.

late entry yesterday we went to see a new oncologist in Newport (South Wales). The good quick news is that we now have a viable alternative to the NICE treatment plan.

I am wonderfully lucky that I have a benefactor who is happy to pay for me to have private treatment. Until now, this hasn’t been needed, I’ve been pretty confident that the Walton Centre are able to offer the excellent surgical care but now Dr Cockwomble has right put me off.  Of all my lucky lucks, this one has to be right heading toward the top of the lucky list. I am beyond grateful for this possibility.

The new plan could be 6 weeks of Proton Beam therapy followed by chemotherapy for a year. Proton Beam radiotherapy is quite new to the UK, the first machine only arrived 18 months ago. The big benefit of Proton Beam is not really that it offers any increase in life expectancy, the data suggest that it’s about as good as conventional radiotherapy or a little better if one of the papers is to be believed. It does however limit the side effects in the short and long term (fatigue, short term memory loss, ability to focus). Interestingly it is now available in the UK for children with brain cancer and adults up to the age of 24. I’m much too old! I’m generally supportive of NICE, I think they make some really tough decisions and the budget is limited. Coming up with “24” as the cut-off must have been an interesting discussion. I think 24 is the age at which we know the brain has stopped developing so it’s maybe a bit reasonable.  It’s essentially a quality of life issue and presumably, as my life expectancy is quite short the total benefit of all those years added up is just not worth it. Anyway, I’ve got my benefactor and I’m very lucky. I know how horrid it is to have short term memory loss and concentration problems – I don’t want it to get any worse and certainly don’t like the idea of permanent, progressive brain damage. I like to imagine that if I’m really lucky and live a longer than expected life that I’ll be able to do that with out having dementia in my 40s.

However… I’m off to get a 3rd opinion next week so nothing is decided yet.

Thanks I really want to say thanks to everyone who has been in touch, been helping me, helping Dee, helping Ivy, sending jokes, news, updates, pretty/yummy things. And again to for all the fundraising efforts too. I’m feeling very well loved and there’s nothing better than that. Just a quick note if you’re donating money direct to the Amy’s brain fund at the Brain Tumour Charity I won’t know who you are as that information isn’t shared. I just get given a monthly total. It’s wonderful that there’s money going in but if you thought I knew it was you, I don’t, sorry! I would be really happy to hear from you but if it’s a secret that’s fine too.