FAQ. And/or the ones you were a bit to nervous to ask and at least one I made up because it’s a good question…
Go get a up of tea, it’s a long one!
Are you OK? Your emails seem very cheery?
The answer to this question is hidden way down at the bottom of this email… *
Don’t scroll down past the cartoon at the bottom if you don’t want to know the scary, sad stuff. I won’t judge you! Possibly don’t read this at work. If you’re a bit sensitive have some tissues handy. If you do want to read it, read it now then come back up to to here so I can cheer you up a bit.
How are you feeling?
In short, a bit weird. Lemotragine, the anti-epilepsy drug is kicking in so my seizures are less intense. However they still happen and that’s strange and worrying and they keep reminding me that I’m not well. I’m tolerating the lamotrigine quite well which is lucky, the list of side effects is terrifying. There’s also a few other things that I thought were just baby brain but are actually tumour related

1) I’ve been getting something called “depersonalisation”, it’s very trippy. Basically I look down at my hands, arms, fingers, legs etc. and they just don’t belong to me. My hands look way too pretty, I often think they must be my sister’s hands.

2) I started loosing words. This is really strange. I lost the word “gelatin”, then I tried to tell mum the story about how I lost the word “gelatin” and couldn’t finish the story except by trying to say “that stuff in marshmallows from cows stomachs”, which of course is was wrong, that’s tripe (euch) and rennet, gelatin comes from cow’s bones. Or so I thought, I just googled this, new fact for you, 44% comes from pig skin. This was distressing (word loss, not origin of gelatin) so I made sure to try and re-remember the word gelatin everyday. After four days of telling myself the gelatin story and using Dee’s remembering system – children’s party -> jelly -> gelatin).  I relearned the word and can now tell the gelatin story easily. Though after sending this email I’ll have no one to tell it too without being really boring.

3) Fatigue. I wonder if this has been building for years. It’s hard to tell, I haven’t had the high energy levels I used to have and it might be the egg. Or maybe that’s just an eggscuse for laziness. Fatigue is also a common side effect of pregnancy, having a baby and lamotrigine. So who knows! It’s also a side effect of brain surgery so I won’t find out for quite a long time, if at all because by then it could still be lamotrigine/tumour growth/ side-effect of having a toddler

All in all though, these symptoms count as pretty lucky and I’m not finding them particularly distressing. Some other people with brain tumours get debilitating headaches and/or seizures that cause them to loose consciousness or control or feeling in parts of their body.
Tell us the hopeful side again? (OK this bit is really for me to keep me perked up, but maybe you’re interested in this too)
I’ve been reading a lot. As you probably know, I’m an avid googler. I’ve started reading academic papers on brain tumours, news about brain tumours, websites about brain tumours, books about brain tumours and anything else I can find about brain tumours whilst carefully skirting round the really morbid stuff. So on the positive side. 1) Young & reasonably fit 2) Tumour not as voluminous as first thought (massive benign cyst in the middle) 3) Tumour accessible and very much operable surgeon can take most of it out. 4) Don’t know exactly what it is yet, this could be good or bad. 5) Life expectancy data is inherently out of date.
So, the good scenario is this – I out perform the life expectancy curve which is quite likely given positive factors above and say make it 10/15/20 years down the line by which point some clever cloggs has worked out how to have a reasonable stab at curing this thing (not completely unlikely given trends in treatments of other cancers and historic lack of investment in this one) and I get to do all the old lady things I’d been hoping for. Yay!
So really this could all be a big mistake and all the crying for nothing then I’ll feel a bit silly. And you lot will look back at me in 30 years time and say “remember that time when you thought you were going to die and got all het up about it. That was HILARIOUS!“
Is there anything I can do to help?
Thanks! I’ll let you know. I have some thoughts on this, might get back to you later. I’m OK right now. I’m delighted that local friends have offered lifts, this is brilliantly helpful. It’s an arse not being able to drive.

Can you take the tumour home to live in a jar?

I’d really like to do this. However, I’m pretty sure it comes out in little pieces rather than in one big lump. I’ll ask the surgeon though and let you know!

How cool will the scar be?
Really chuffing cool. Like a very hard person who’s been sliced up in the most dramatic way. However, I’ve bought myself a nice soft beanie hat to cover up in polite company (and for mum who doesn’t like that sort of thing).
Any other news?
Ivy has her first tooth. It’s sharp and I think the teething is affecting her, and subsequently my sleep. She is also trying very hard to crawl. After weeks of only going backwards she is finally making limited forward progress. Ideally she would just stop there for a while but I suspect she’ll keep on working and will begin to pick up speed soon.
Also, the universe has answered, and provided me with additional squash friends (actually possibly not the universe, I asked around and found a few people willing to give it a go – hopefully not just out of sympathy but I’ll take it either way)
Here’s a cartoon for you that made me laugh! 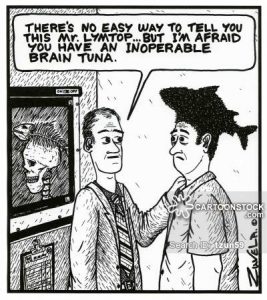 *
No, I’m not really OK, although I’m handling it all quite well. I’m not prone to panic. This was one of Dad’s best qualities and I like to think I inherited it from him. However, what sort of weird, emotionally stunted person would be OK with this?! It’s a crazy shit emotional nightmare. Basically we’ve just gone through a huge adjustment to my projected life expectancy. I’m not sure I really mentioned this in black and white before but low grade glioma is an incurable, very slow growing cancer/pre-cancer/not quite cancer yet (I think its category up for debate but it’s definitely not benign). Unless the diagnosis changes significantly after the biopsy I can be fairly confident of two things 1) I’m not going to be an old lady  2) This will kill me at some point.  This is very sad and has made me cry. Lots. And Dee too. We had to stock up on tissues. Twice. I was quite looking forward to being an old lady, sitting in the garden with a cup of tea and hanging out with lots of old lady and gentlemen friends and old lady Dee. I’m really quite interested in what the world will be like in 20/30/40 years. Plus I worry, it’s my job to look after Ivy. That’s what mummies are for. I feel sad for mum too, if there’s one thing that I imagine is worse than finding out you have incurable cancer it’s finding out that your child has. She’s not said much about how she’s feeling but I think it might be quite shitty. She also has her own support network, she’ll be OK.
However, I have read something once that I believe to be true. When grumpy, miserable people win the lottery they’re happy for a little while then revert to being grumpy and miserable. When happy, chipper people have accidents that cause them to become disabled they’re pretty miserable for a little while then readjust and continue to be happy and chipper. I think we’ve just had to go through / are still going through an adjustment process. Ultimately I’m still a pretty happy, optimistic, chirpy person. Just I’m going to die. We’re all going to die, but I’m very likely going to die a bit sooner than you. Also Ivy will be fine, Dee will be fine, everyone will be fine. Sad for a bit then fine again after because they’re pretty happy chappies. Bit too early to tell with Ivy but she always seems pretty happy and I’m betting she’ll take after her Mammie. There’s loads of love in the world, so much that mine will only be missed a little bit in the long run and they can get lots from each other and other places.
I discussed not sending this section because I don’t want to make everyone else miserable. It was cathartic to write maybe it’s done its job. However maybe it’s an opportunity for you guys to have a look at life and contemplate your own mortality and all that “living in the now” stuff. I think that’s probably healthy once in a while to contemplate your own mortality though I wouldn’t recommend dwelling on it! (IF YOU HAVEN’T WRITTEN A WILL GO AND DO ONE NOW YOU NUMPTY)
For us, it has certainly forced us to have a good hard look at our lives and what we’re doing with it. We were happy to conclude that we’re exactly where we want to be doing pretty much what we want to do and really wouldn’t change a thing.
all