I wanted to write another update, it’s been a while! Two weeks ago I had the delightful “Eggstraction”. It wasn’t that awful but it is quite a violent bit of surgery. Of all the parts of the body where you’d want to be poked, I think the brain is probably up there on the “most unpleasant” list. Also there’s a hole in my head. I can’t really feel it though. I’m promised I’ll be able to see it on the CT scan. I’ll put another “data release” request in and get copies of the scans I think. Just in case. Also so I can send them to random doctor / scientist friends who might be interested / helpful.
There’s not much fun to say about my hospital stay really. The food was disappointingly poor but Corinna bought me mini M&S trifles which was the highlight of the day. Also some cheesy mash. Nurses Corinna and Dee were amazing. I had a slight falling out with the regular nurses about catheters (I cannot tolerate a catheter, it’s like someone pressing your wee button over and over and over again, this is not conducive to rest, relaxation or peace of mind). Eventually my “persuasion skills” won out (with a bit of help from Cory and Dee). Dee went to report to the nurses that “Amy is googling it right now, she says she’s going to take it out herself”. This was true. I was going to. I’m still feeling a little angry about it now. The nurses seemed to be of the opinion that as they had “helped us out” with the breastfeeding all my favours and been used up. I’m still feeling a little angry about it now but just managing to get over it I think! Makes me need a wee just thinking about it. Aaarrhhhh.
On the more entertaining side I did manage to upset the nice Italian doctor just a little bit. If you remember from my previous post, I had been quite firm with Mr H about how I’d quite like him to do the surgery himself and not let one of the “students” meddle with my brain. Dr Italian (we don’t actually know if he’s Italian but there was something about his Tank Top, Glasses and funny accent that seemed to hint it) was clearly a member of the surgical team – he came on all the rounds with Mr H and a bunch of other people. I later asked one of the nurses who everyone was and she said he’s a doctor who’s just about to become a consultant. I asked if he was “work shadowing”, apparently they don’t call it that. Anyway upon a visit from Dr Italian later I asked him, firstly “Were you there for my surgery”, “Yes”, he was. Then secondly, if he’d “had a go” in my brain, the answer rather pleasingly, “no, Mr H normally lets me, but not this time” I said “Yes, I asked him not to let any beginners play with my brain”, “I AM NOT a beginner”. Oh dear. I did apologise and I think I was forgiven. Apparently one of the side-effects of brain surgery is personality issues. Let’s blame it on that.
After the surgery, Corinna did an excellent job of keeping mum updated except for one slightly comic “My hearing is fine!!” incident. Corinna very accurately described my incisions as “very tidy” this was heard as “very tiny” and turned into a story along the lines of “it’s amazing what they can do, taking that enormous tumour out through such a tiny hole”. I think mum might have been under the impression that I had keyhole brain surgery. Unfortunately not. Which brings us briefly to my Cancer Hat. I’m actually rather fond of it, it’s a soft, think silky beanie which I bought thinking it might be nice to stop my stitches catching on clothing or my pillow and also to hide my very hardcore scar. However, the family’s conclusion is that it’s actually quite clearly a cancer hat and therefore much more disturbing and upsetting than the big scar. I suppose with just the scar you can pretend that I just got whacked over the head with a lead pipe. I occasionally sneak the cancer hat on anyway, it keeps my ears warm. Cold ears has been the oddest and least expected side effect of brain surgery. A week after the surgery I went to see the district nurse who tugged and pulled and snipped away at my 26(!) stitches. Unfortunately this didn’t fix my cold ears and I can still, occasionally, be found sneaking that cancer hat on to warm them up.
So who wants to see the scar?!
Here it is. With Ivy. And my brilliant sleeping-all-day onesie. 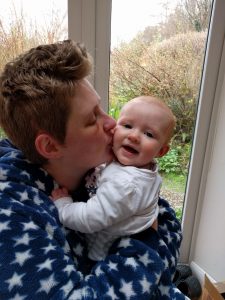 Since coming home, I’ve mostly been sleeping. Turns out all that brain poking rather takes the wind out of the sails. Dee is looking after me, the business and Ivy with some help from mum of course. Mum takes Ivy for a little walk whilst Dee has impressively been beating her “up and down the mountain behind the house” PB. I’m a little bit bleary-eyed which I’m hoping is down to tiredness rather than any optic tract damage.
As previously mentioned, I am not allowed to take the egg home in a jar. It has been sent off to Nottingham for analysis. From there, I’ve signed it over to be used in research. I’m not sure how it works but I like to think they chop it up into little bits and send it to the clever people who are busy working on brain cancer treatments. Tomorrow, I will be seeing the surgeon in Liverpool again to talk over this pathology report. It’s a big deal and has a significant impact on my prognosis. Rather distressingly Brain Tumours are crappy and not curable but I’d like to draw your attention to THE PLAN. I may have mentioned it before, but THE PLAN is to keep living for quite a bit longer then hope that some clever person has come up with effective treatments / cures for my sort of cancer. There’s plenty of hope around this plan and I’m sticking with it. At some point I will let you know at least some of the outcomes of tomorrow’s meeting but I need to be careful with just how morbid I get about it all so let’s see how it goes.
I’m also happy to announce that yesterday I was able to wash my hair. There was some debate and not a lot of advice forthcoming from the hospital nurses and the district nurse so I went with Dr. Google and decided that two weeks was an OK length of time to wait. I now smell DELIGHTFUL! Thanks very much to some friends who sent me away with a hospital bag of delights, smellies and entertainments. Lucky Me.
My short term plan is to be quite a bit better soon. I think I need more sleep but after that I think I will feel well again. I’ll be back on that squash court before too long!
Lots of love,
Amy xx
all