There’s not much new information, though I seem to have found plenty to say. Do skip ahead if you’re finding it a bit dull, I won’t know and wouldn’t be offended even if I did.

I was luckily enough to spend an hour being completely still in the big noisy MRI scanner at the Walton Centre last Monday. Disappointingly, there was no music at all, not even the dreaded radio 1. The experience of trying to stay still for that long in one of the most claustrophobic and noisy places imaginable is not one I’d recommend. I had high hopes that I would peacefully mediate through this experience. I tried meditating for a while then started thinking about how MRI machines work. I couldn’t remember, though I think I probably knew once. What I did remember is something that my friend Ruth once told me about when she visited a Steiner school. Apparently, at Steiner schools if a child asks an “age inappropriate” question (e.g. a 7 year old who wants to know how a photocopier works) the Steiner answer is “the magic gnomes do it”. I think “how does an MRI scanner work” is probably age inappropriate for most of us so was able to spend a good twenty minutes picturing the little MRI gnomes who were having a disco, doing construction work, sawing down trees, starting up noisy engines, headbanging, playing the drums in a very boring way, digging roads, demolishing buildings and generally jumping up a down. By the end I had a very sore head and was feeling a bit fed up.
I did though, get a some pictures so you can see how scarily large my egg is, in case 6cm x 3cm x 4cm wasn’t scary enough. I’ve helpfully put a big red arrow on it in case you can’t tell where it is. For reference, the big white circles at the top are my eyes. If the circumstances were different it’d pretty cool to have an inside view of my head. 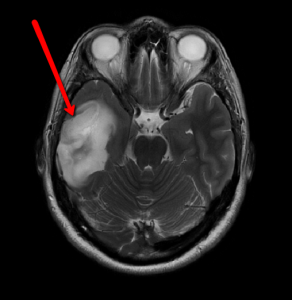 On Thursday I had a meeting with the surgeon. I think I’ve worked out why the neurosurgeons are always so chipper with me. The large majority of brain tumour patients are about to die fairly quickly (over 80%). I’m actually in a small minority of patients with a comparatively positive outlook. I think the surgeons have used up all their sad, sympathetic faces on the other people and only have the chirpy, smiley ones left for me.  He described the surgery plan, made me sign a disclaimer saying I understood all the risks (death, brain damage, the dreaded droopy face, vision etc. etc.) and answered my questions:
“I’ve got loads of brain, I’m sure I can spare a bit – can you just take the tumour out plus a little bit more and see if we can get 100% out?”  No. apparently this tumour infiltrate up to 2cm into the brain and they can’t see it, and even with my extra big brain I can’t spare 2cm all around the tumour. Given that we can be pretty sure that 100% is not achievable the statistics show that for anything greater than 85% removal there is not a significant improvement in life expectancy so the 95% he says he will remove is as good as it gets.
“Are you sure you’re the best person to do this job and you have the best available equipment?” I’m left reasonably though not totally reassured on this. There is new equipment on its way, intra-operative functional MRI. Its not ready to go yet and it probably won’t help in my case. In terms of people, he does plenty of this type of surgery and has been doing it for many years. There are probably others who will do a very similar job but not any better. This leads me to the next question…

“Are you going to do the surgery yourself or will you be letting your students operate?” Again, not totally reassured on this. There will be students present, they might get a shot at my brain but he will be supervising closely. No he won’t be popping out for a cup of tea.  When pushed on this a bit further I got to the answer I was hoping for “Yes, I will be doing your surgery”. I suspect he just said that to shut me up, he very well knows I will be completely knocked out and can’t actually check on this. He thinks there is no benefit to awake craniotomy. Maybe because he knows I might just ask questions all the way through.

After seeing the surgeon I went to meet the specialist nurses who gave a sort of physical once-over in preparation for surgery. This included tickling my feet. Apparently being tickled is not the appropriate response to foot tickling, who knew? Apparently they’re testing for some sort of reflex. Proud to say that despite the giggling I appear to have passed all their tests.
​My surgery is scheduled for Tuesday the 14th. I have to go in on the Monday afternoon, presumably so they can stick the dreaded “nil by mouth” sticker on my bed in advance.
I’ll probably send you an update from hospital next week. I’ll be twiddling my thumbs on Monday I imagine so might do so then. If not, I will happily accept positive thoughts, prayers (if you’re into that sort of thing) and postcards. Or, nothing at all is also perfectly acceptable.
Lots of love,
Amy xx
all